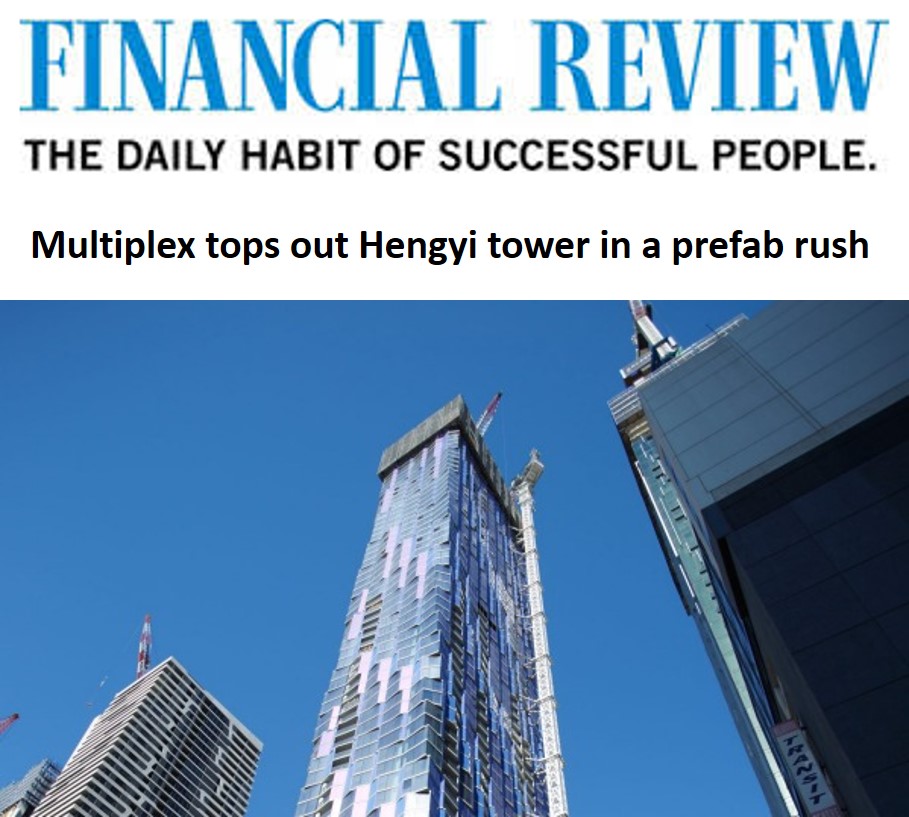 Multiplex tops out Hengyi tower in a prefab rush

The time saving can be expected to deliver financial benefits for Hengyi , as construction finance terms are reduced and apartment settlements are made possible sooner.

The 70-level building, on the corner of Franklin Street, has sold its 607 apartments, which will be due to settle in the second half of the year.

“There have been many challenges to get to this point, with the small building footprint requiring a complex delivery and loading schedule,” said Graham Cottam, regional managing director for Multiplex Victoria.

“Precast and prefabricated components have been utilised … to improve on-site speed and work within the constraints of a small CBD site.

“We have reached topping out in record time several months earlier than anticipated, saving time on every floor cycle by using these methods.”

Designed by architects Elenberg Fraser, the tower features purple tinted angular aluminium panels that change colour depending on the perspective.

Hengyi, a subsidiary of Shandong HYI Group, a powerful player in China’s Shandong province, has significant exposure locally through two other residential projects in Melbourne’s CBD.

It is also developing a 57-level tower in Auckland, New Zealand.

Hengyi director for property development Dean Fossey paid tribute to Multiplex and its “outstanding job” after the builder “backed itself” by putting up a second crane on the project and adopted the prefab methods.

“Those initiatives should be acknowledged. They have adopted some initiatives that give us certainty of delivery,” he told The Australian Financial Review.

Multiplex is also engaged on Hengyi’s next major project, Swanston Central, a high-rise tower with more than 1000 apartments on the edge of he CBD. That tower is 95 per cent sold down and already under way.

Hengyi acquired that project, with a planning permit, at 170 Victoria Street from listed Singaporean developer Chip Eng Seng for $64.8 million two years ago.