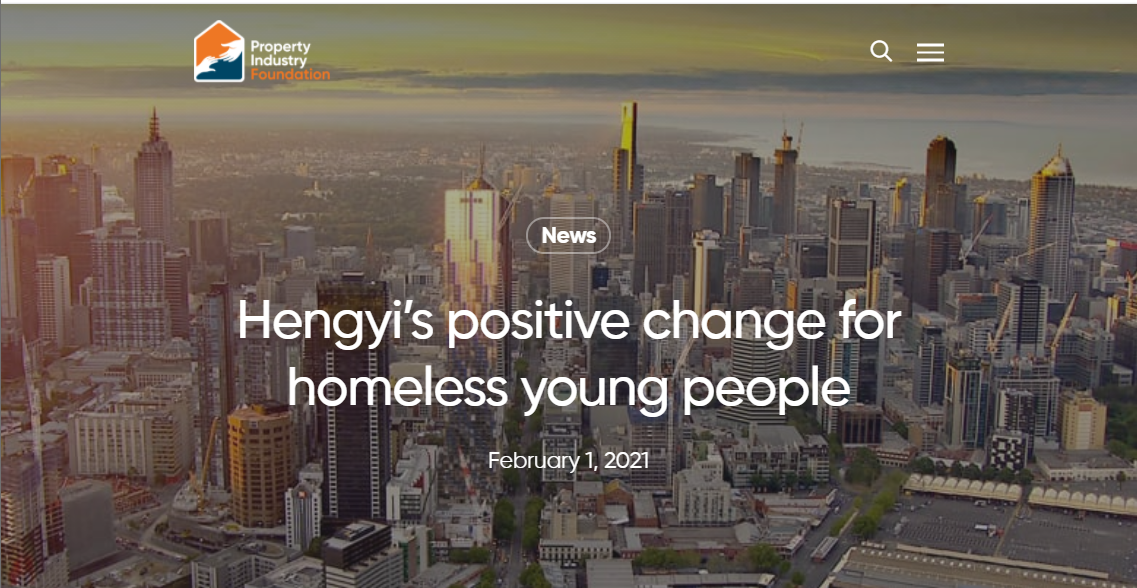 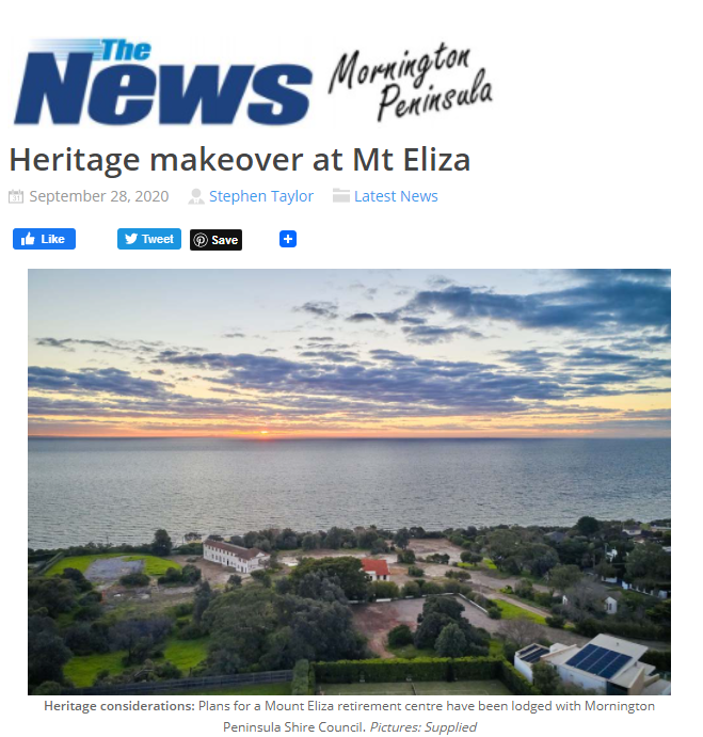 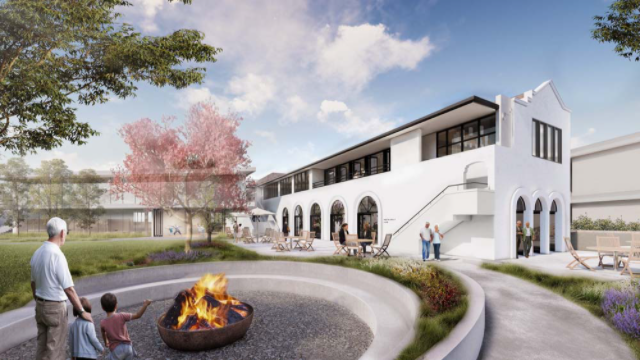 PLANS have been unveiled to transform a 3.41-hectare site at Mount Eliza into a $160 million “retirement community” called Beachleigh.

Australian-owned developer Hengyi Pacific last year bought the 33 Jacksons Road site, overlooking Canadian Bay, from the Department of Health and Human Services. Its 19th century residence and two other buildings were originally part of a private estate built in 1878. They were later transformed into a hospital and then an aged care centre.

The buildings have a heritage overlay and will be retained and restored.

It plans to regenerate the 200 metre waterfront and integrate it into the project for community use. The chapel will be converted into a public cafe and provedore.

Heritage experts Lovell Chen are advising on the heritage works while VIA Architects and landscape architects Tract will design Beachleigh and its surrounds.

General manager Simon Manley said the developer was “committed to respecting the historic grounds” while restoring as much of the vegetation and public offering as possible.

“We were very sympathetic of the site’s history and wanted to be careful not to overcapitalise on the built form. So, we’ve focused on low-density buildings with a maximum two-storey height limit, spread out across the site so as to maintain the sprawling grounds.

“The heritage component was a big appeal for us so we’ve been working closely with Heritage Victoria and our heritage consultants to restore and find an appropriate adaptive re-use for the heritage buildings.

“We wanted to create something the whole community could be proud of, something that the public could enjoy just as much as those who live there, so we’ve proposed turning the old chapel into a cafe and will be restoring and integrating 200 metres of public foreshore into the design.

“We’ve been careful to respect the neighbouring view lines along with a large portion of the existing vegetation, including the historic 100-year-old Moreton Bay fig.”

Beachleigh is Hengyi’s first foray into retirement living, with the developer confirming it plans to retain the site over the long-term.

Architect Mark Allan said: “VIA Architects is proud to design the next chapter of this rich and storied site. The design encompasses a warm and thriving community with spectacular views of the Port Philip Bay.’’

The development is expected to create 200 local jobs during construction, with more jobs to be created upon completion in administration, management and operations. 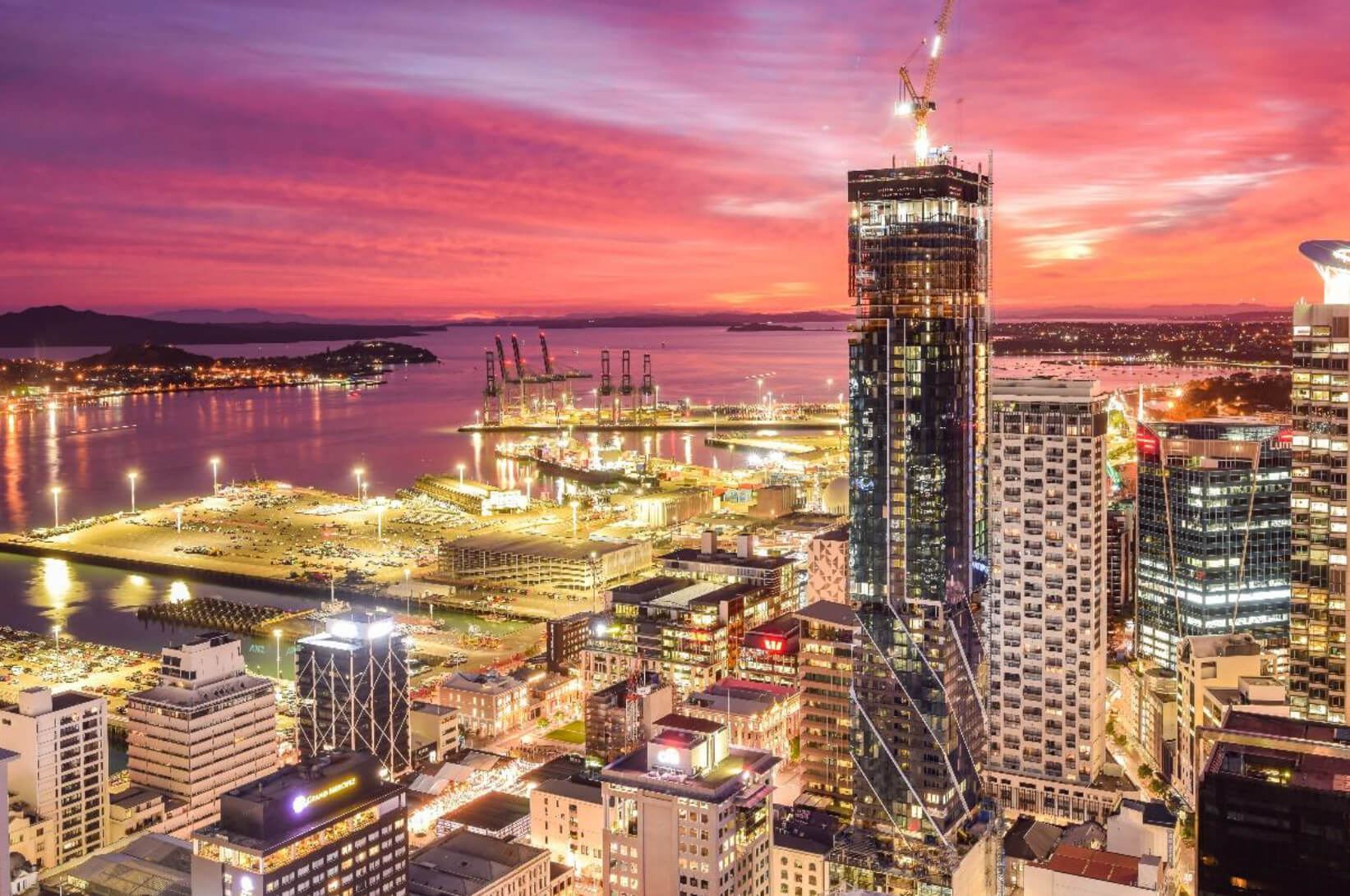 The Pacifica structure is largely complete with the L55 Slab pour having occurred
in mid-May. Construction of the rooftop plant rooms and the top of the outrigger
columns is now underway.

The final pour of L55 has triggered the deconstruction of the jump-form; with full
removal being targeted for mid-June. The top of the jump-form (if you get to see
this before it is removed) sits at approximately the height of the final façade
parapet.

The façade continues to chase the structure, with panels now having been
installed up to L49 and the remainder of the panels due to be installed by early
July. The feature glazing now creates a shimmering effect in certain light as it rises
into the Auckland skyline.

Fit-out trades continue throughout the building with ceiling closures and joinery
being installed upwards of Level 32. At lower levels, the Commerce Street podium
façade begins to twist up into the ribbon façade showcasing the wrapping totemlike
form of the building. 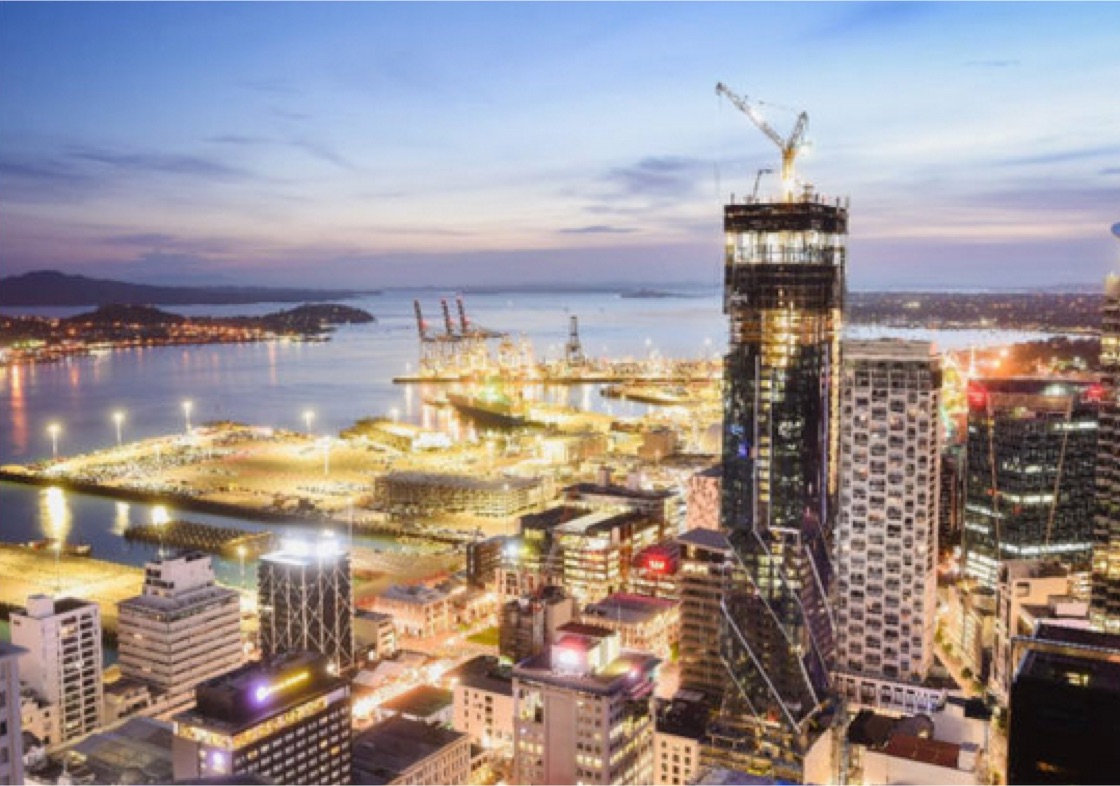 Construction of The Pacifica continues to progress on programme!
Progress Status – February 2020: 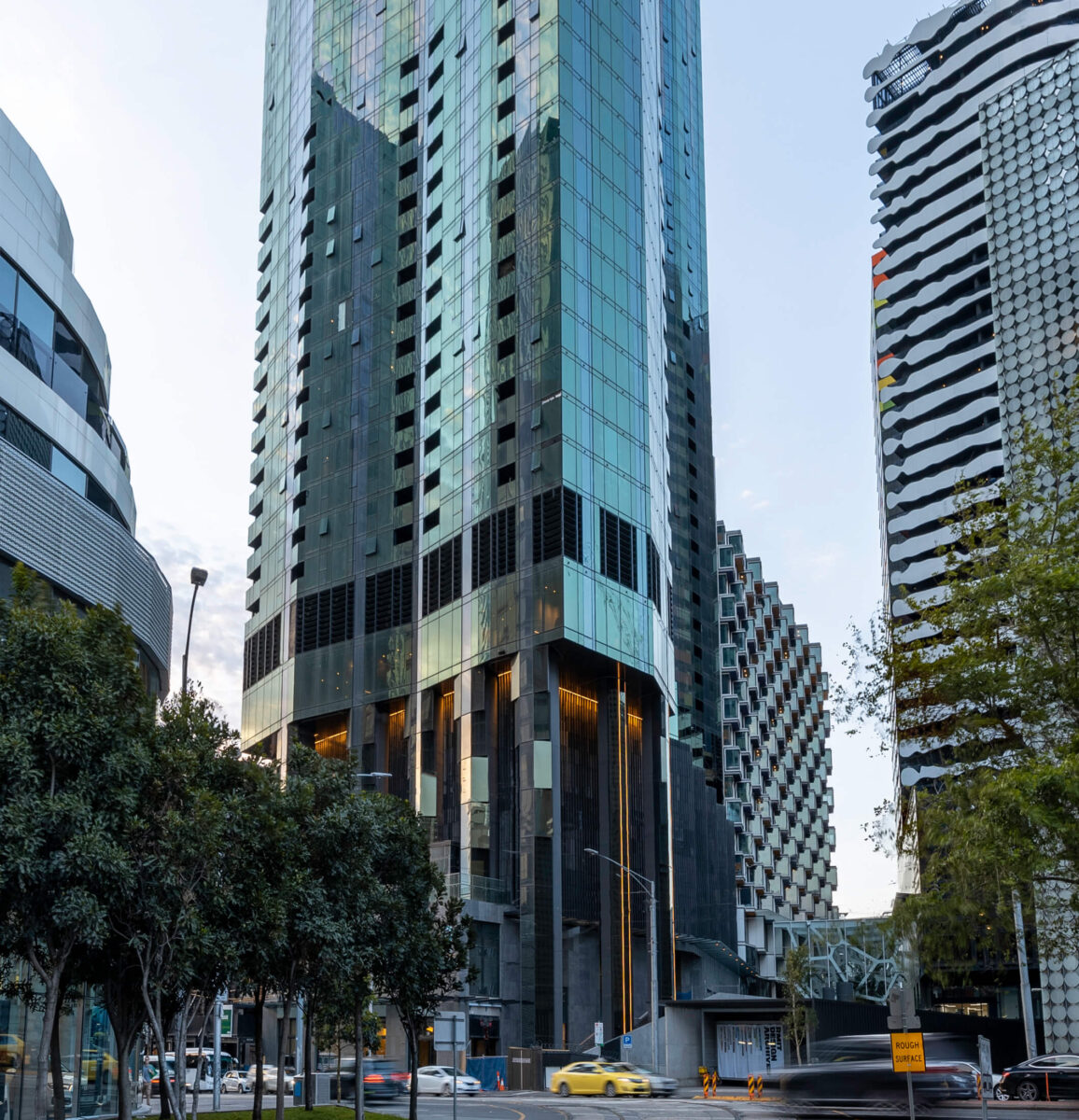 Construction on Swanston Central continues to progress on program with the following updates in December 2019: 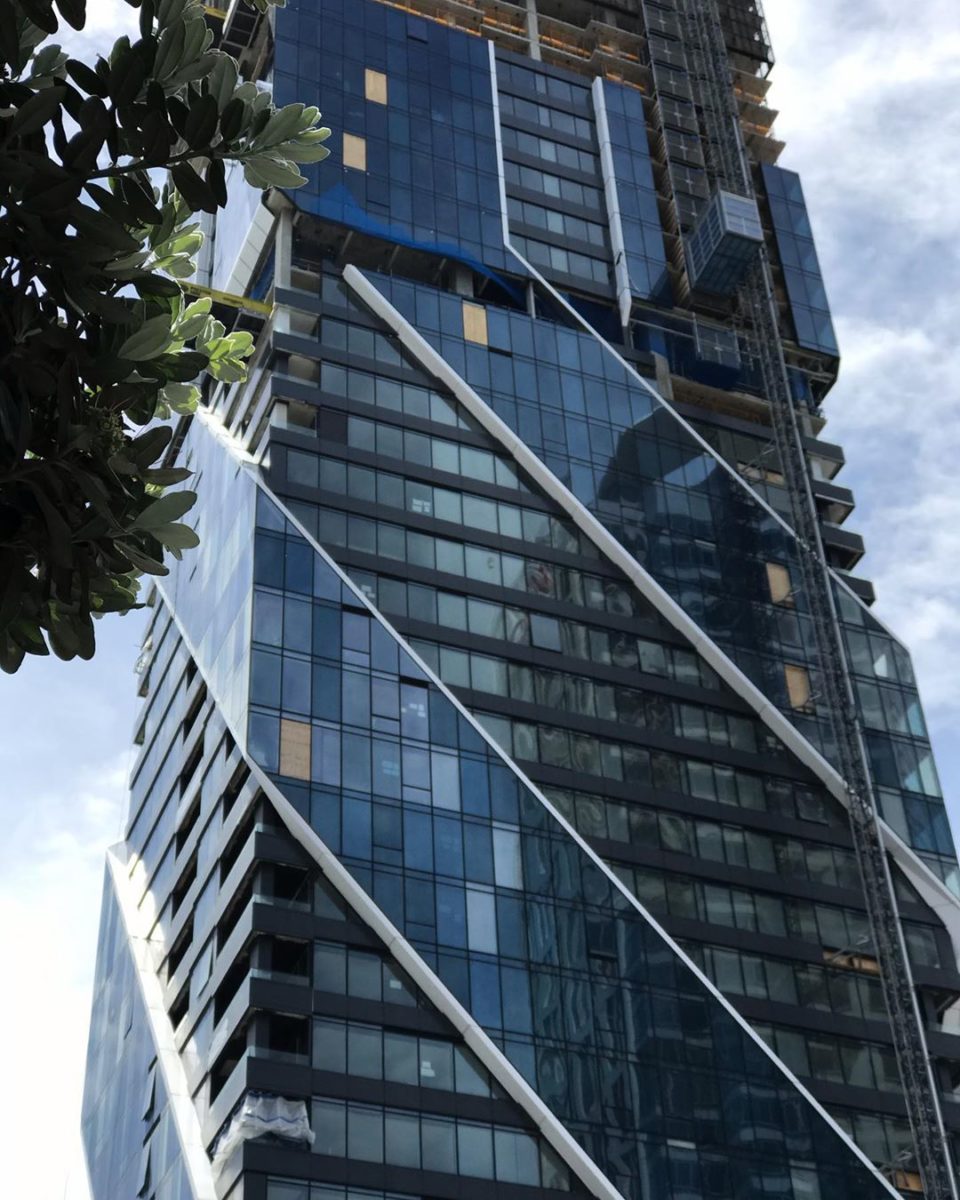 With construction having commenced in November 2017, The Pacifica, located at 10-12 Commerce Street Auckland New Zealand, is advancing as per programme, having achieved the following milestones as at Decemebr 2019: 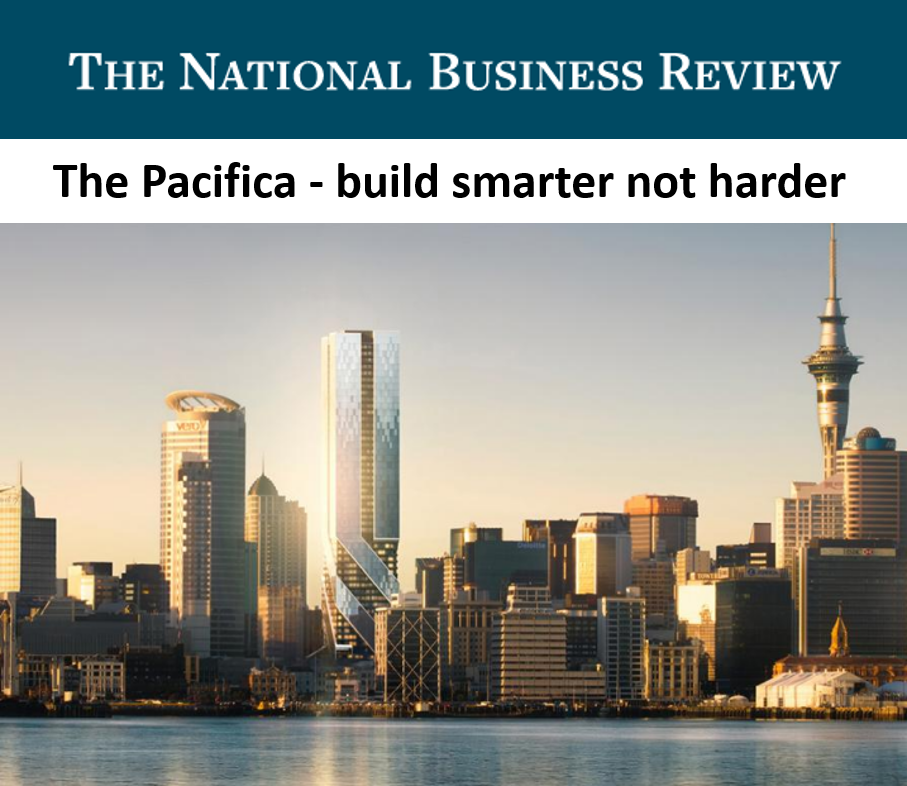 The Pacifica – The National Business Review

The Pacifica, one of Auckland’s largest developments, has broken through into the city skyline at 24 storeys so far – on time and on track – thanks to a building technique new to New Zealand.

Australian construction firm Icon, 70% backed by Japan’s Kajima Corporation, is on track to complete the ambitious project by October 2020. Pacifica is a $300 million, 57-level hotel and apartment tower being developed by Hengyi Pacific, a Melbourne-based developer with ties to Chinese developer Shandong HYI.

The Commerce St project has progressed far faster than the nearby Seascape residential development, which has been stalled by not meeting the building code’s fire regulations and hasn’t progressed much further than foundations.

More observant Aucklanders might have noticed the multi-storey building is being built differently from the standard high-rise, with a black cage drifting up the building as it grows.

Jumpform construction systems are far from a new high-rise construction technique in New Zealand but the scale of The Pacifica build means Icon can use a comprehensive system that hadn’t previously made the jump over the Tasman and is described as “leading edge technology worldwide.”

It encompasses the full tower footprint and all the vertical elements – core and columns – in a single vertical “factory.”

Normally jumpform methods used in New Zealand are pulled up by cranes, and occasionally self-climbing hydraulic systems, typically only bringing the formwork of the core up, allowing for efficient repetitive concrete pouring of the building core only.

Cores typically include any elevator shafts, stairwells and utility spaces.

Icon’s technique uses a steel “superstructure” and synchronised electric screw jacks to pull the formwork for both the core and structural columns up, meaning concrete for the entire tower skeleton can be built on a five to six-day cycle, floor by floor.

It also reduces the reliance on the tower crane, meaning construction can still go ahead in strong winds and other adverse conditions.

Hanging screens attached under the jumpform minimise the risk of falling objects and falls from height whilst the structural slabs are being built below. The screens climb up the building with the jumpform, again reducing the dependency on cranes.

The method is more affordable for taller buildings as the set-up cost is the same for a 50- storey building as it would be for a 10-storey building.

A glass ribbon on the exterior, designed to reflect the surrounding city and waterfront is in the throes of being attached. The angled glass façade panels are manufactured and tested in China, then shipped to New Zealand.

Icon was the builder of Opal Tower, the Sydney residential tower evacuated on Christmas Eve after concrete panels cracked. The damage to the tower wasn’t structural and remedial works are under way, but owners have reported potential buyers are staying away and the apartment values have crashed.

It has assured Pacifica apartment buyers there are no structural or design similarities between Opal Tower and The Pacifica.

The Pacifica was the first apartment building in New Zealand to get an Overseas Investment Office transitional exemption certificate – meaning foreign investors can buy the apartments without OIO approval.

CBRE national director of residential projects Gavin Lloyd said 80% of the 282 apartments in the tower have sold – only about 12% to 14% of sales were to foreign buyers despite the exemption, which Lloyd said is, “quite down on traditional CBD apartment buildings.”

Lloyd said The Pacifica was originally designed for owner-occupiers, too expensive for most landlords. “A lot of the foreign buyers are investors and naturally enough, they live overseas. They’re traditionally more attracted to investor-grade product.”

There is also a boutique hotel element to the building – offering 35 rooms with a separate entrance.

Amenities for the apartments include a pool, spa, gym, library, cinema and community terrace, among others. Car parking with a 24/7 valet service and car elevator will also be available to tenants. 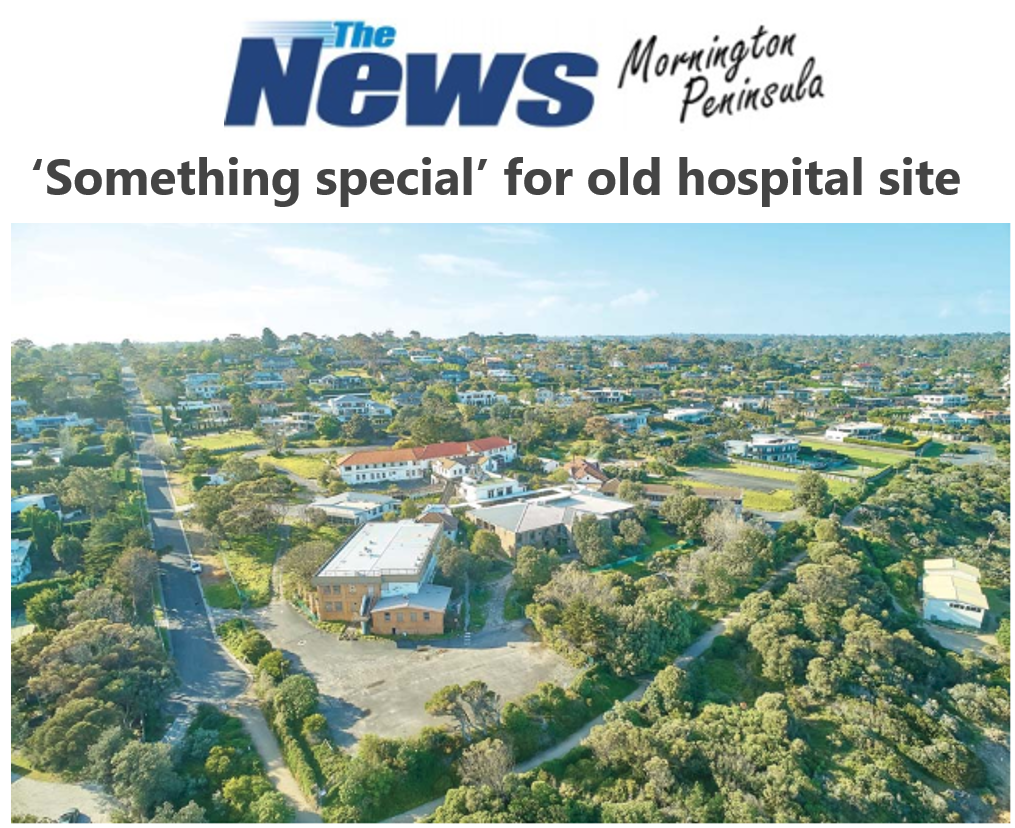 ‘Something special’ for old hospital site

Melbourne-based property developer Hengyi Pacific bought the 3.4 hectare site for just over $17 million earlier this year and is “currently working closely with Mornington Peninsula Shire Council to determine the … best use for the site that respects the surrounding street character”.

General Manager Simon Manley said he was “very excited with our latest acquisition and are looking forward to transforming the unused parcel into something special”.

The developer is “working with council to determine the final outcome for the site and will look to lodge a town planning application shortly”.

This could either be subdivision into luxury residential lots or high-end retirement living.

Mr Manley said heritage elements of the chapel on Jacksons Road and administration and facilities buildings from the 1930s could be part of the redevelopment. These included the Spanish mission-style buildings by prominent hospital architects Stephenson and Meldrum with their rendered masonry and tiled roofs.

“We saw it as a good opportunity as the site is, in relative terms, a blank canvas to basically start again and also to create something that the precinct will benefit from,” said Mr Manley, adding that similar sites become available “once-in-a-lifetime”.

The $17 million-plus sale price was several million less than anticipated when the beach-front site was last on the market in March 2017. It is thought strict heritage and regulatory requirements and a weakening property market reduced demand for the General Residential 1 zone site.

Other potential uses touted at the time included hotel accommodation and medical, subject to council approvals. 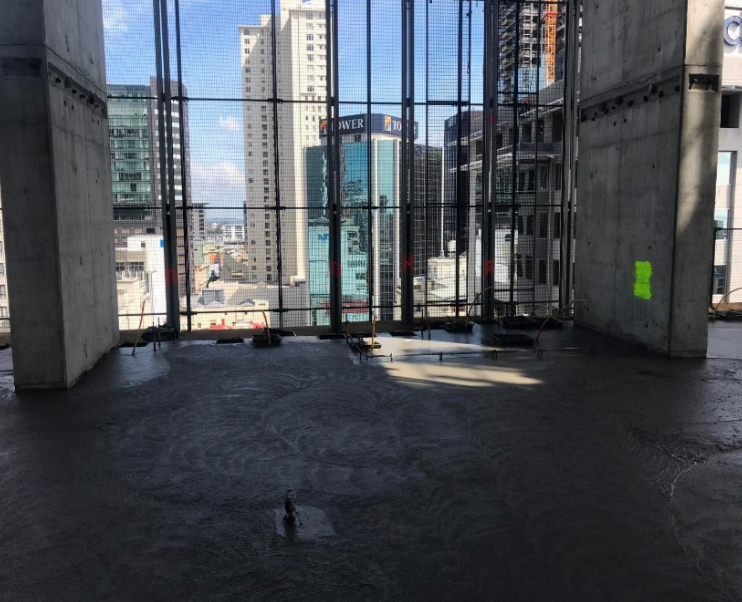 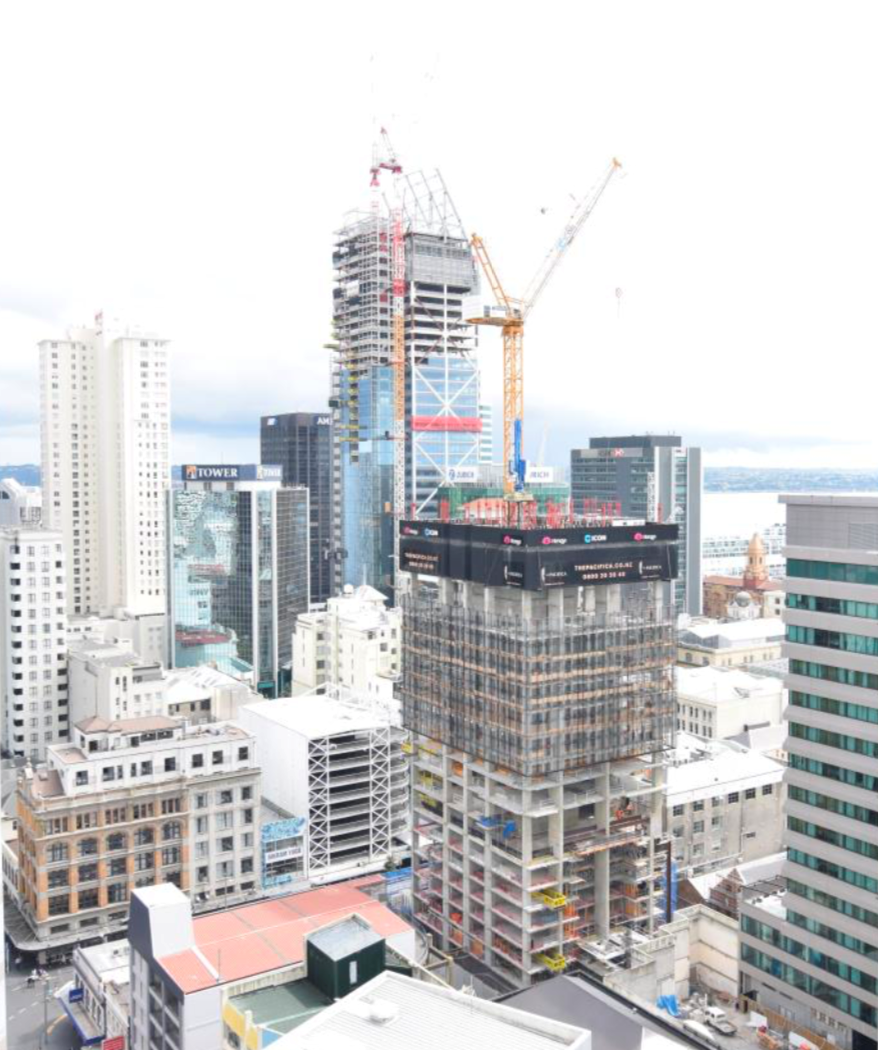 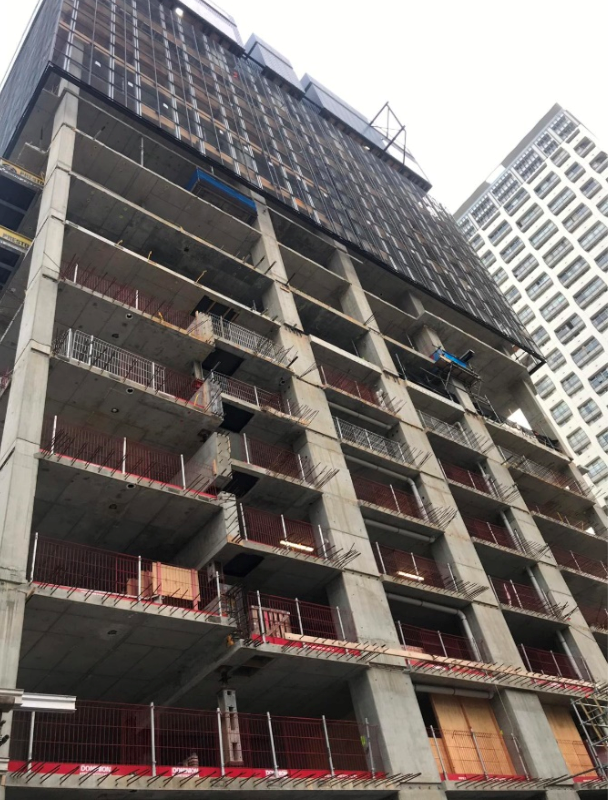 With construction having commenced in November 2017, The Pacifica, located at 10-12 Commerce Street Auckland New Zealand, is advancing as per programme, having achieved the following milestones as at mid-March 2019: