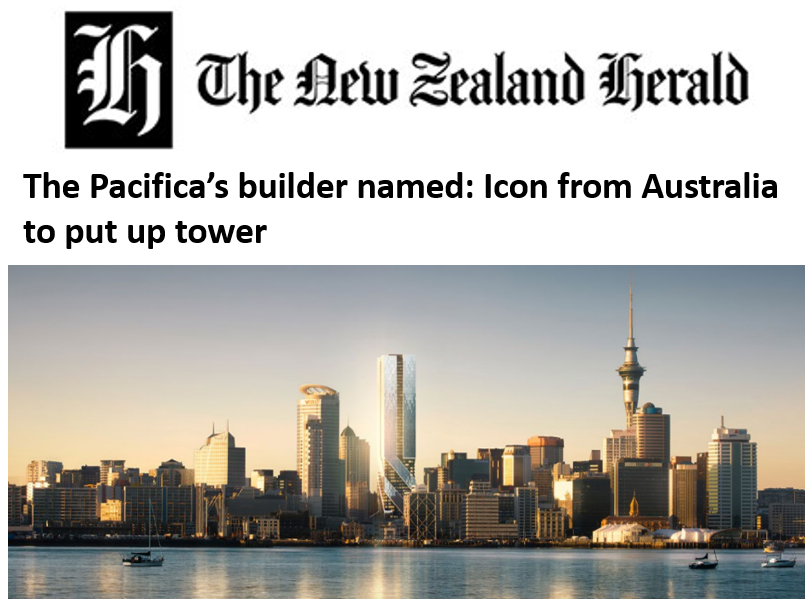 The Pacifica’s Builder Named: Icon From Australia To Put Up Tower

A builder new to this country, has been named as the construction company contracted to put up Auckland’s planned 57-level apartment tower.

The block, which could be this country’s tallest, is planned for an Auckland site between Commerce St and Gore St in the CBD.

Hengyi Pacific, the Chinese-headquartered developer with an Australian office which is planning the tower, announced the builder.

The Pacifica will have 57 levels, 54 levels of apartments including 282 units, a hotel and amenities including pool and outdoor terraces.

Dan Ashby, one of New Zealand’s most experienced high-rise commercial construction chiefs who also worked on the Burj Al Arab in Dubai, will head Icon here.

The appointment of Icon Co comes just over three months after The Pacifica’s official launch, during which time 102 of the 282 apartments in the 57-storey tower have been sold, totalling more than $160 million in sales, from the development’s show suite at 152 Quay St, level nine.

Icon Co, an award-winning Melbourne-based construction firm is in the process of establishing an office in Auckland and is headed up in New Zealand by Dan Ashby, former executive general manager of Hawkins Construction, and previously managing director of Multiplex Constructions in New Zealand.

The Pacifica will be Icon Co’s first contract in New Zealand.”